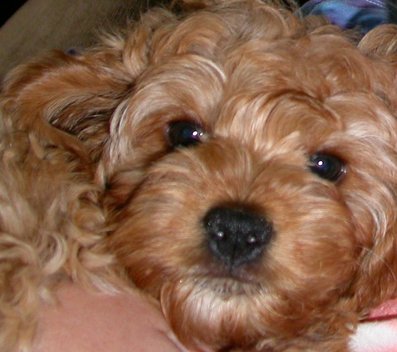 Meet Rusty!
Rusty is a beautiful little teddy bear! He does his duty and protects the family like a mighty warrior, despite being a mere 18 pounds. Well, he barks at people at the door but that is as far as it goes. He is quickly best friends with anyone that is invited to come through the door.


He has a curly dark apricot coat with a tiny  bit of residual white on his chin and chest. He has black coloring of his eye-rims, lips, paw pads and nose leather. Rusty's lovely dark apricot coat has a beautiful curl. He does have more of a tendency to mat down-especially around his hindquarters. He carries the sable gene and he passes his rich shade of apricot on to those puppies. Rusty has perfect size and bone and a beautiful face.

He really loves to cuddle and he is extremely smart and obedient. He passes his keen intelligence on to his babies. He is very friendly and social and goes nuts for company! He remembers our friends and family well, and gets so excited to see them he can barely sit still! He will sit and be patient for permission to greet... but his tail wags so hard his whole body squirms side-to-side on the floor.


Rusty loves to play fetch with anything he can get us to throw. He adores a toy squirrel and carries it around and "grooms" it. We call the toy his "baby" and if we ask him "Where's your baby?" he will go and retrieve it from his toy box. He especially loves to play "hide the baby" and he sniffs out his favorite toy. (And I have rarely met a Cockapoo that didn't adore the hide-a-squirrel toy from Kyjen)

Two years ago we added a (human) boy baby to our household and Rusty was the immediate absolute favorite family member of our son! Rusty loved to lay his head as close to the baby as possible and he even tolerated hair pulling (we tried to prevent that, of course) and baby jabs to the face! Rusty doesn't mind. He just wants to be close to his family. Rusty kept bringing his "baby" to the (human) baby, hoping our little son would throw his toy! Two years later these two are the best of friends.

Rusty is a very vocal dog. He makes "talking" noises like the husky is well-known for. He growls and rumbles in his throat to express that a particular scratching session or petting session is wonderful. He also "talks back" when I tell him to hop in the tub for a bath (but he does it). He "talks" and gets excited for treats (and will do just about anything for bacon), or when his people come home from work.


Rusty also has one quirk that never fails to make us laugh: he feels the need to have a pillow wherever he lays down. Anything will work as a pillow. Rusty will lay his head on a pair of shoes, a folded pile of clothes, a blanket or pillow, of course, but his absolute favorite pillow is Rosie!


Some of his puppies exhibit his sweet traits; laying on shoe-pillows, "talking" when happy, sleeping on their backs & scooting food around in their food bowls with their muzzles-like they're checking for hidden treasures! Flip through/play our slide show below to see pictures of Rusty from a puppy through adulthood.


Rusty is set to retire in 2014/15 (shhh! Don't tell him!) so he can live out his old-man-dog days in lazy comfort, surrounded by pillows.

Back to Meet Our Dogs